Some time off from work recently meant more time to play in the kitchen.  Unfortunately, most of my experimentation yielded disappointing results.  First, there was the smoothie that just wasn’t good (it involved cocoa butter).  Then there was the kuri dip that never came to be.  The recipe sounded so great in my head and I was eager to finally roast the beautiful red squash that had been sitting around in my kitchen for the last few weeks or months.  But apparently winter squash does not actually last forever.  After I cut it up and roasted in in olive oil and tasted it, I realized that no amount of spices would mask the bitterness.  So into the compost bin it went.  Then the next day, Saturday, I screwed up toffee cinnamon oatmeal cookie bars.  I still want to try them again, but next time I’ll use almond flour like the recipe calls for and not ground almonds (too coarse).  I should also probably get an oven thermometer.  Anyway, that night, after a mini adventure of climbing over snow banks and trudging through blizzard winds to check on the car, I decided to keep dinner simple.  And it was just right.
*To toast the pine nuts, heat in a dry skillet over medium heat for a couple of minutes, watching closely, just until lightly browned and fragrant. 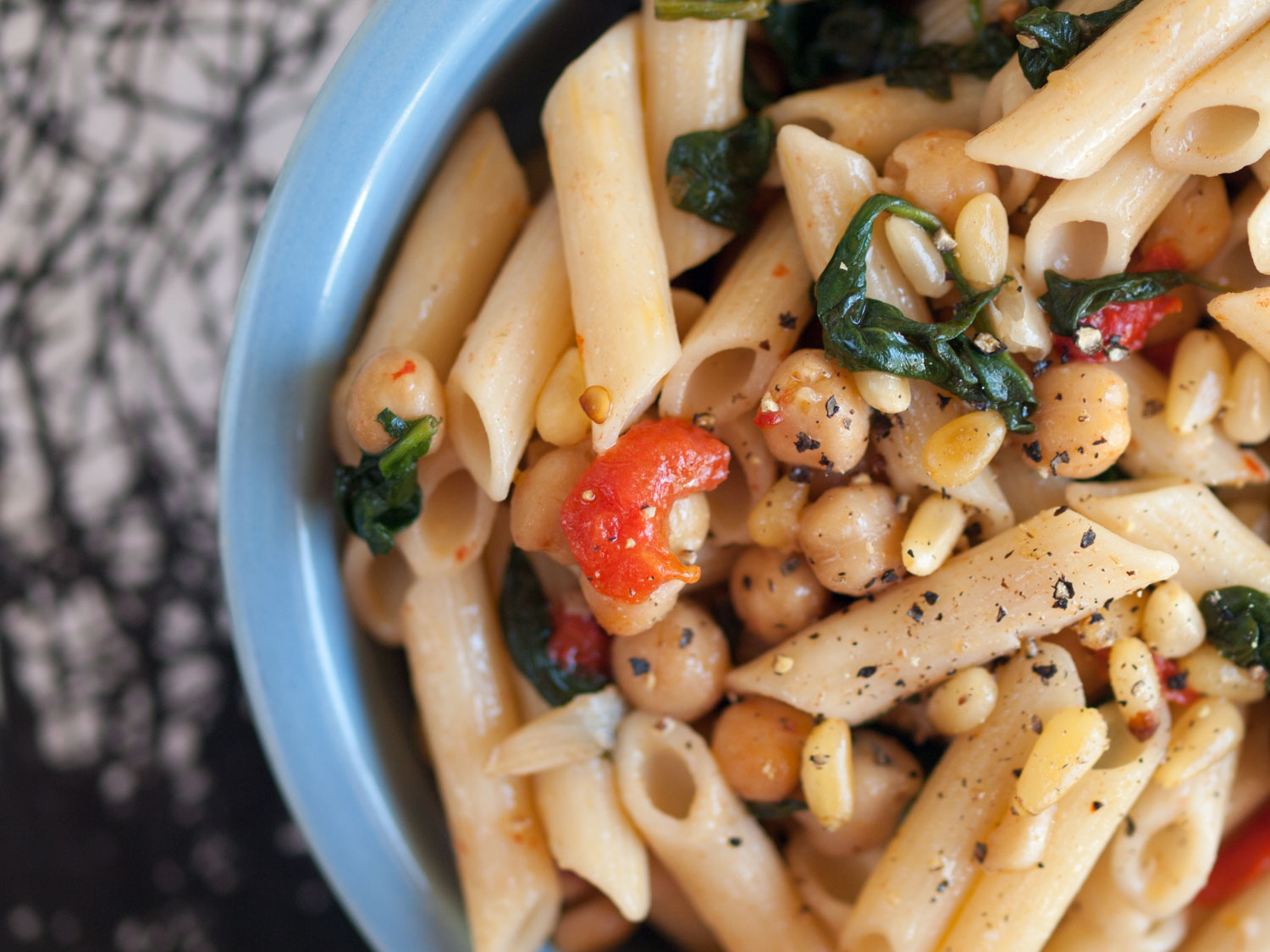 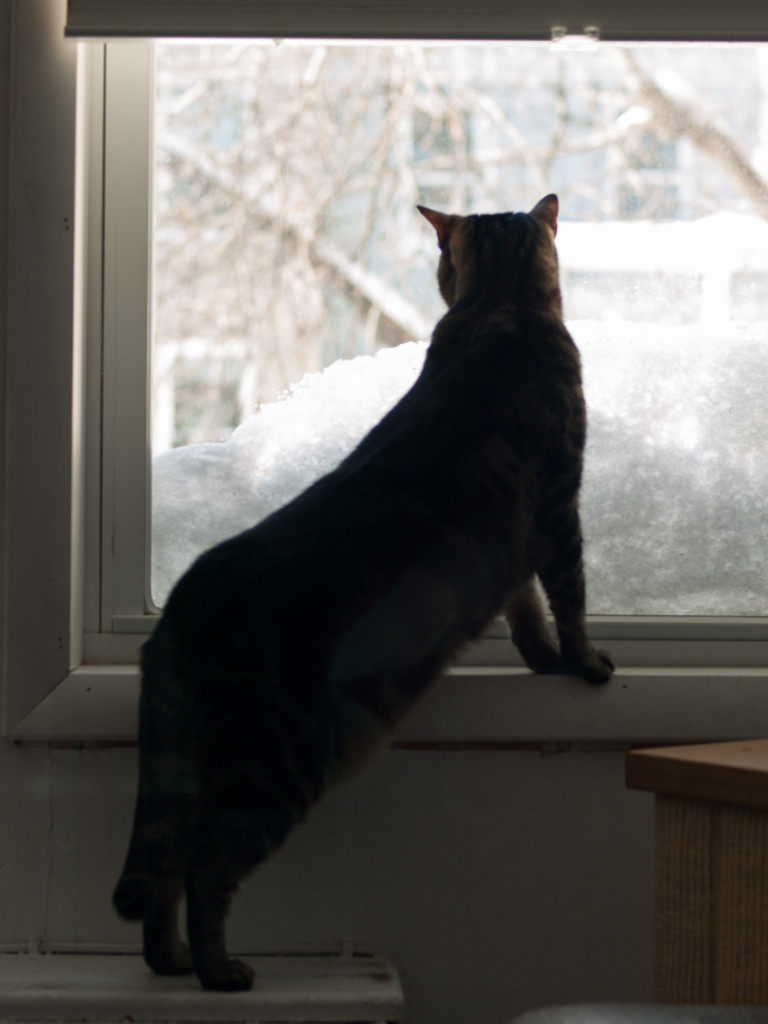 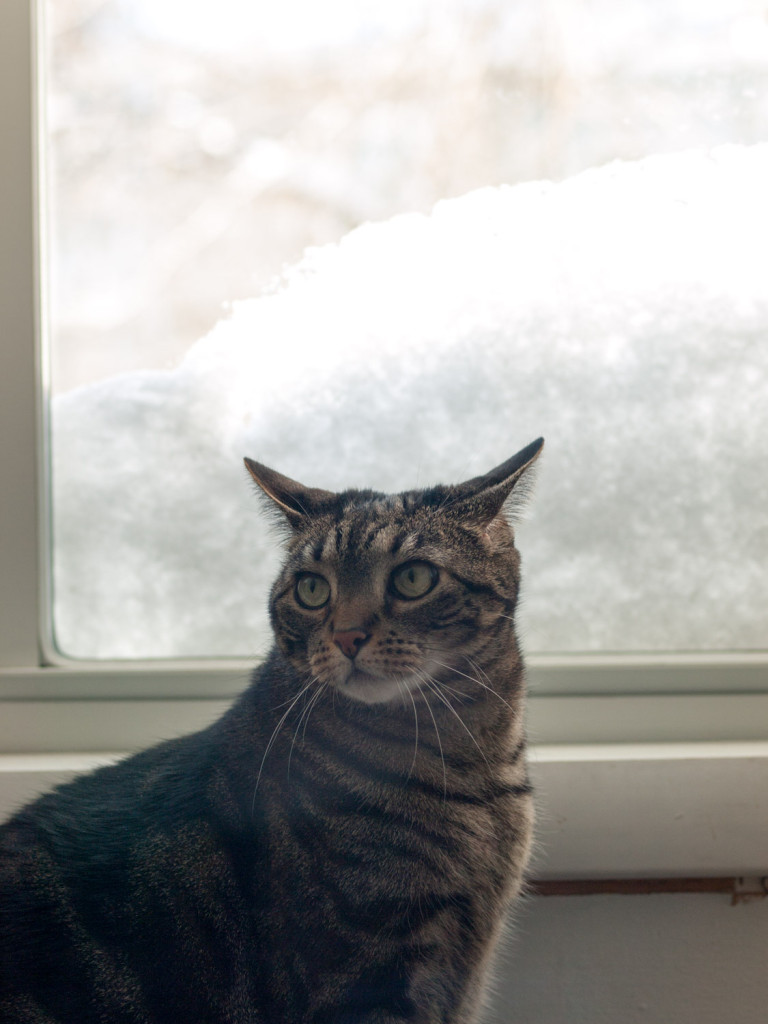 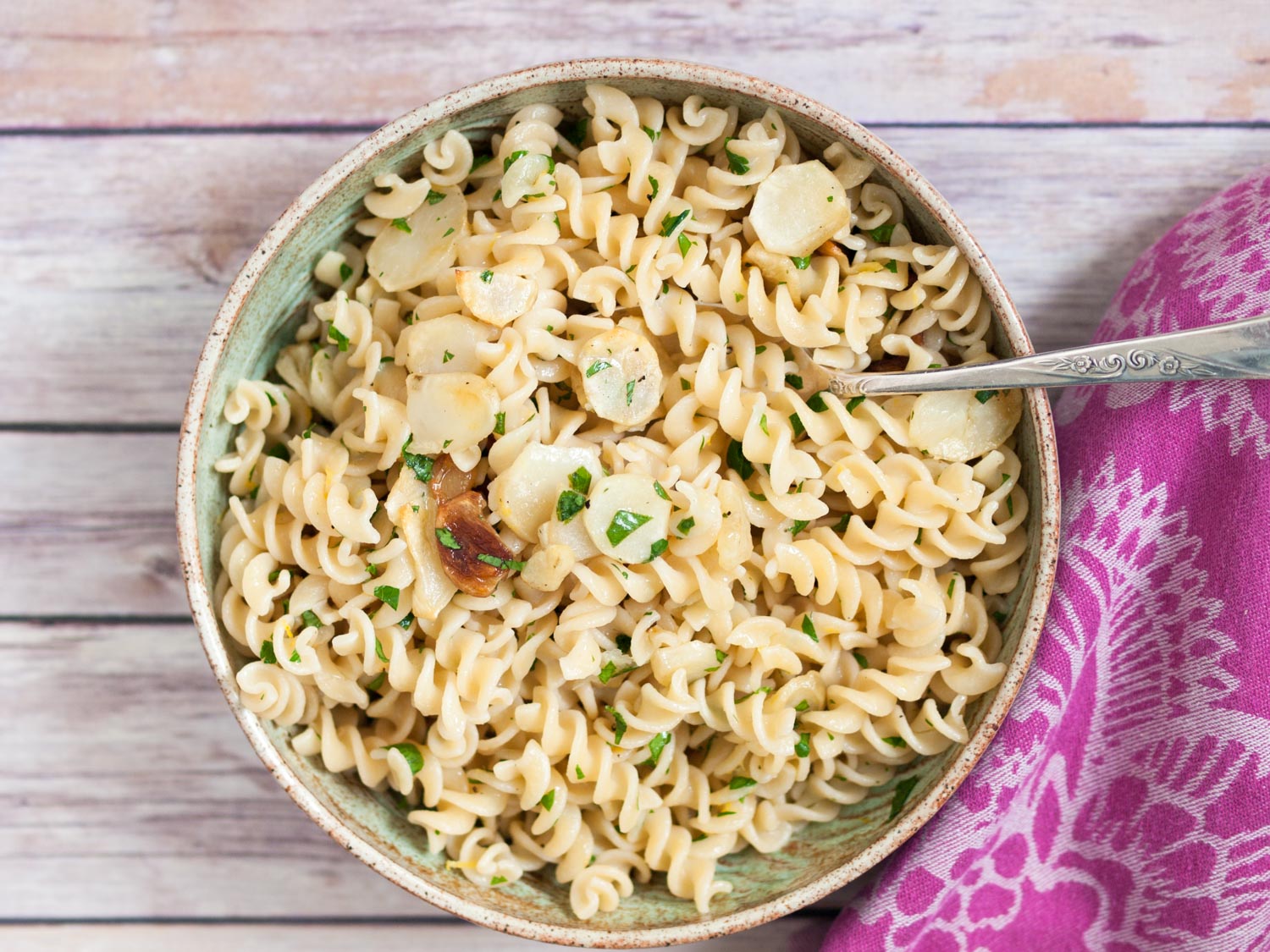 I first tried sunchokes at a restaurant.  They were in a salad: raw, sliced thin, with escarole and lots of lemon and salt and pepper.  I don’t remember much else about the salad– I think it was pretty straightforward– other than that it was delicious, and that I was bummed when it was taken off the menu.  I sort of forgot about sunchokes until recently, when I tried them again at the farmers’ market.  A seller was offering samples of the vegetable– small chunks sautéed with fresh turmeric and some kind of herb which I forget (sage maybe?).  I decided to buy a bag and bring it home to the fridge, where it sat and sat.  And sat.  Weeks later–after the holiday madness– I pulled out the bag and hesitantly inspected the tubers, which, to my surprise and delight, looked exactly the same as when I had bought them.  Which is to say, like funky little ginger potato hybrids.  I wasn’t entirely sure as to how to prep them and while I remembered that the sunchoke I had sampled at the market was unpeeled, I decided I should probably do a little research.  I’m glad I did.  Yes, the skin is indeed technically edible, however, when I learned that the sunchoke, or Jerusalem artichoke, is also known as the “fartichoke,” I figured it best to err on the side of caution.  After scrubbing the sunchokes, I peeled off the skin, rinsed them again (to remove even more excess starch– or at least that was the idea), then patted them dry.  I roasted them until they were browned and a little crispy yet also meltingly tender.  Served over pasta with lemon and parsley, they made for a very tasty, very gratifying dinner. 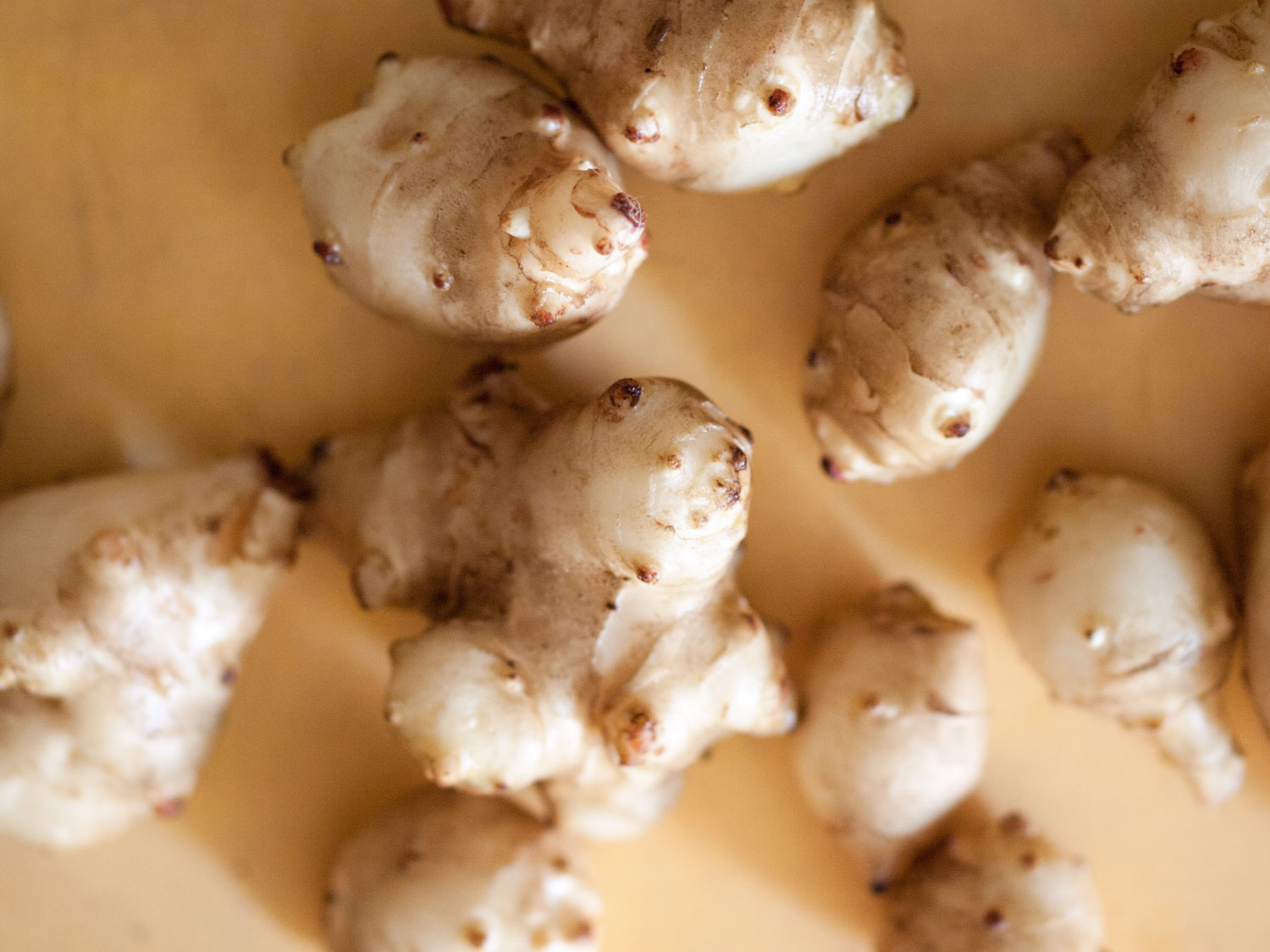 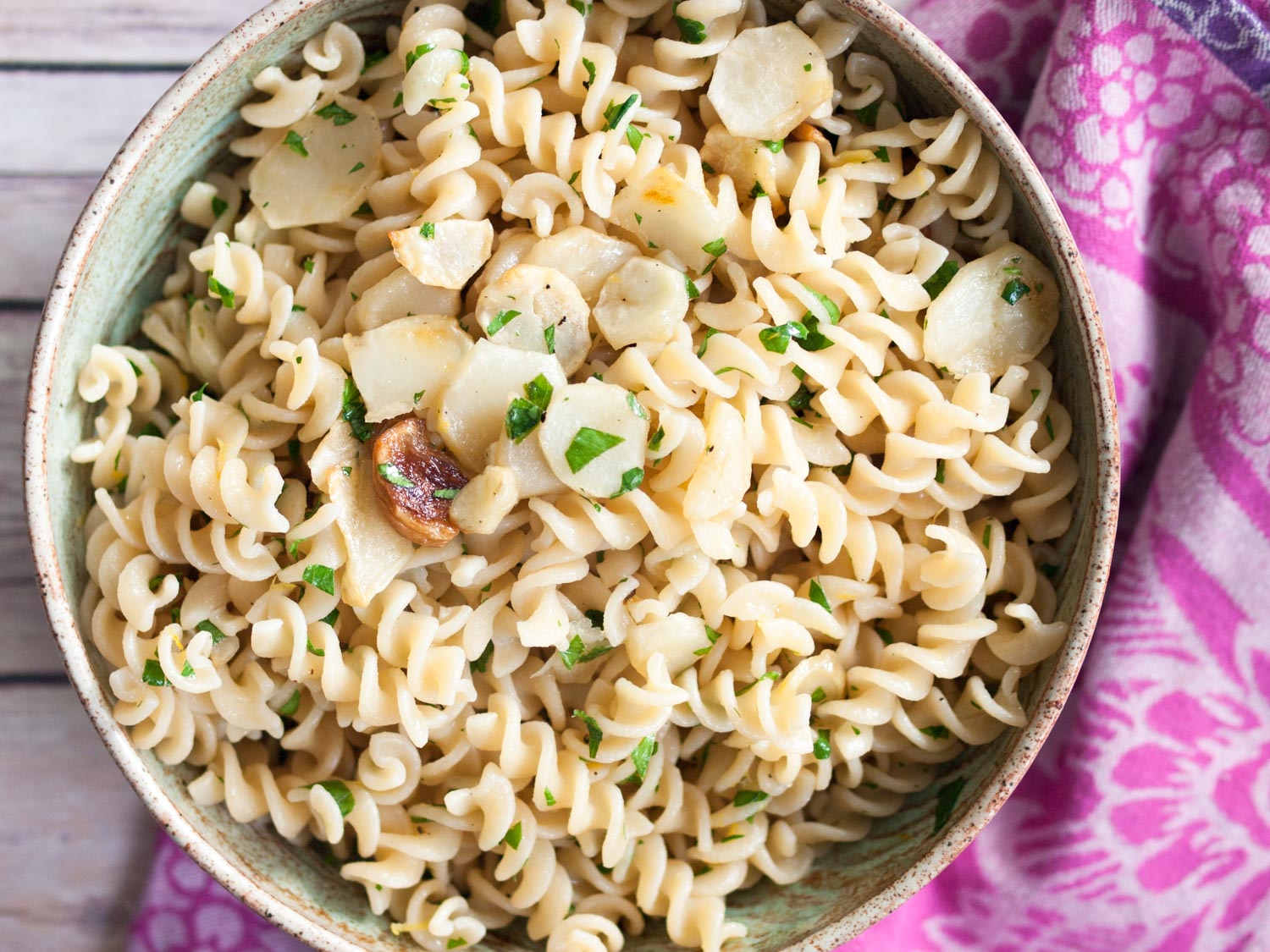 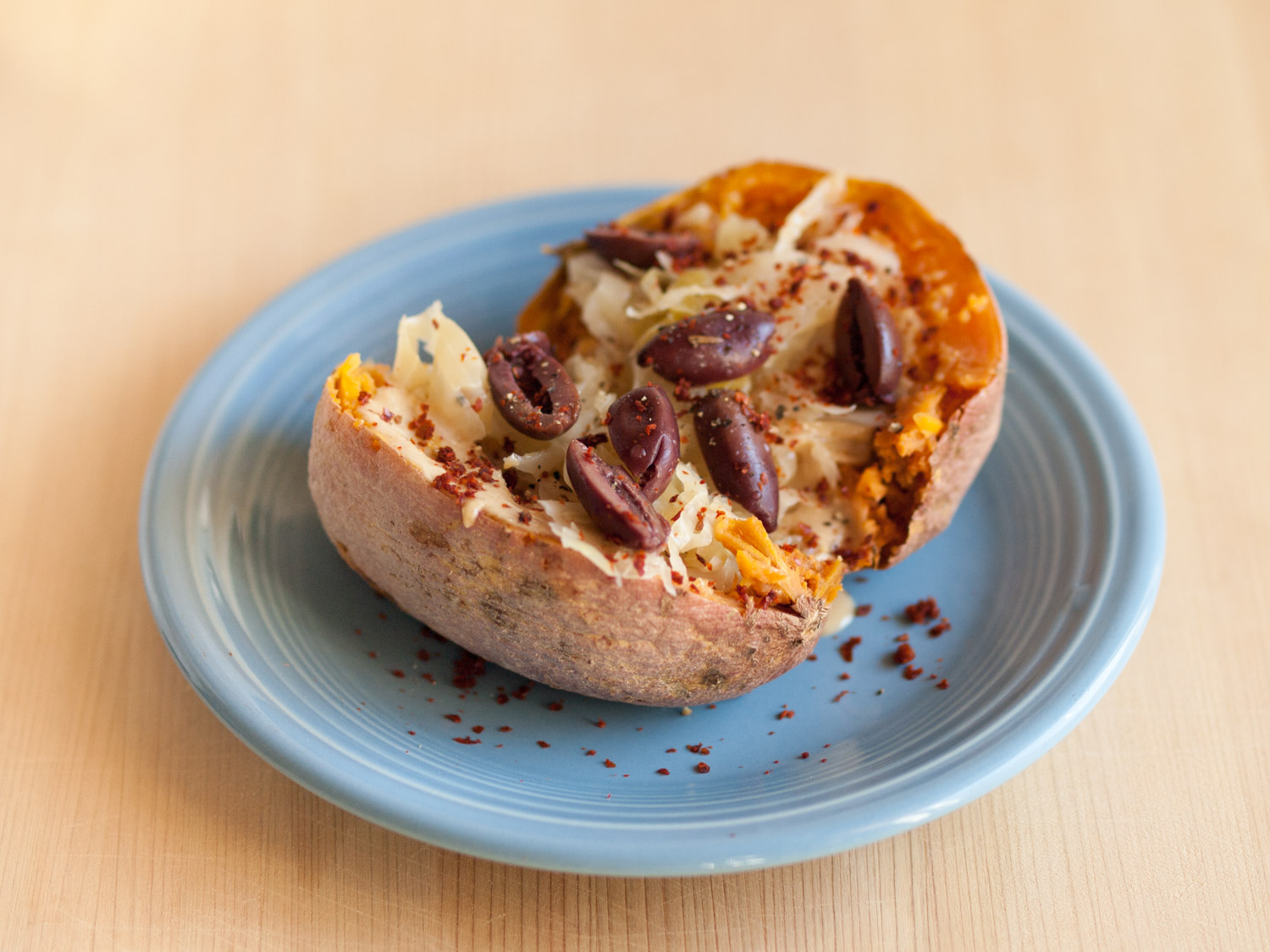 This is some real deal everyday eats right here. I love having sweet potatoes on hand because they’re cheap, nutritious, tasty, and cook up easily (my preferred cooking method: the microwave). In fact I almost titled this post “Lazy Girl Sweet Potato Lunch.” Then I thought the better of it, realizing that wanting a quick meal didn’t necessarily make me lazy, and that perhaps “Busy Lady Sweet Potato Lunch” would be more appropriate. But then I also didn’t want to exclude anyone, because this is a sweet potato for the masses. Or at least for people who like tahini and olives and sauerkraut. Be sure to use sauerkraut with live cultures so that you’re getting in on that good bacteria action. Your gut will thank you.
*To cook the sweet potato in the microwave: wash and scrub sweet potato, pat dry, and poke holes in it with a fork. Microwave for 5-5½ minutes, or until cooked through.
*Or bake in the oven, perhaps in batches.
*The aleppo pepper is not actually necessary here, but it’s an ingredient I definitely recommend checking out. It’s not as spicy as pizzeria style crushed red pepper flakes but very flavorful, and adds a delicious kick to all sorts of foods. It’s especially fab on avocado toast.

Cut open cooked sweet potato and add the tahini, mashing it into the flesh to disperse. Top with saurkraut, olives, and pepper(s). 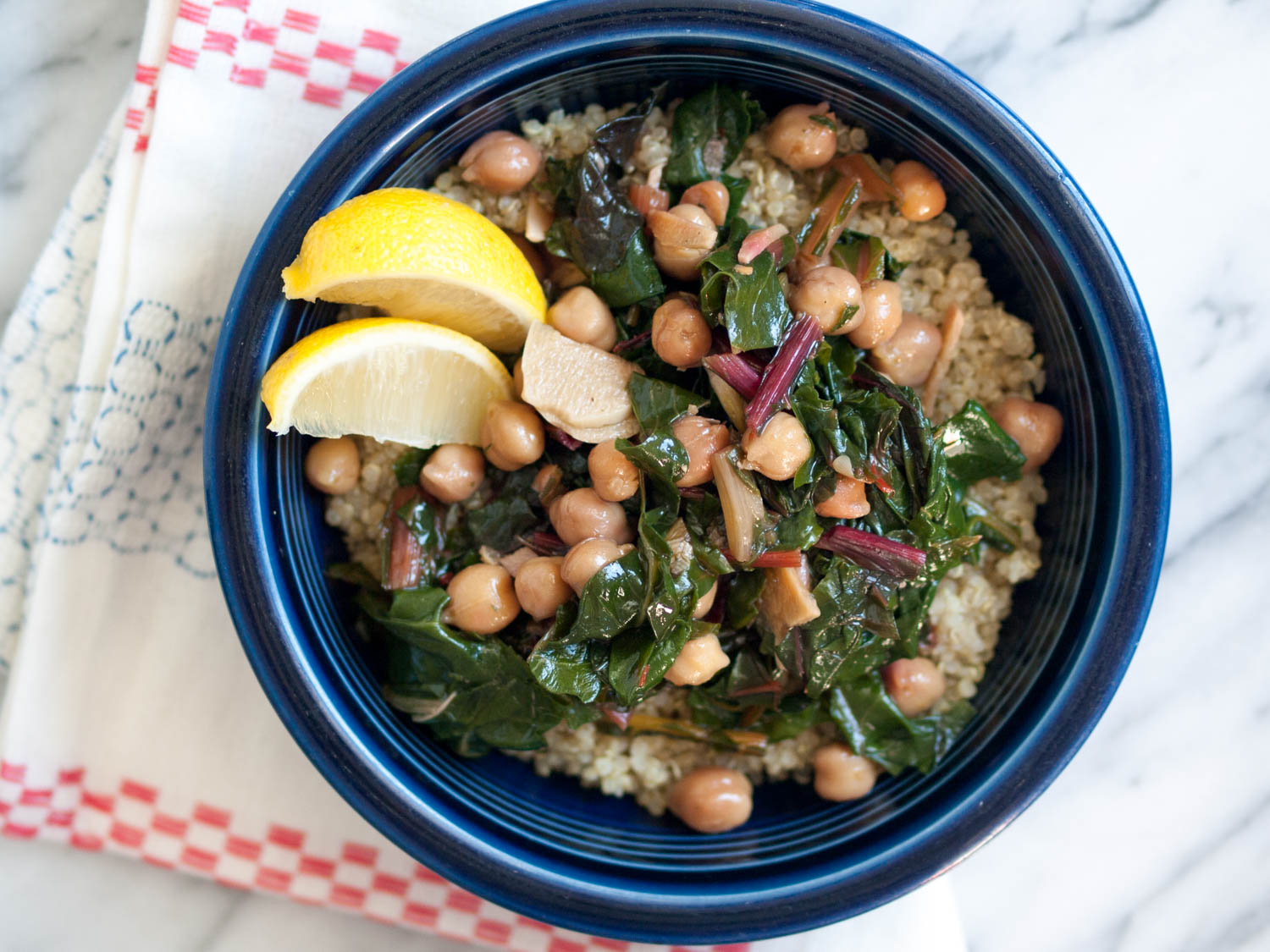 Chickpeas and chard were pretty much made for each other.  Here they’re prepared simply: the chard is braised in garlic and oil and broth, then the chickpeas are tossed in, then everything’s spooned over savory quinoa, also cooked in broth.  It’s juicy and toothsome and really hits the spot.  Of course if you don’t want to use quinoa, pasta would be just as delicious.  In any case, it makes for one cozy meal– something I think we could all go for.
*Because the stalks of the chard are tougher than the leaves, they need a longer cooking time.  First cut off and discard the very ends of the stalks.  Then cut the stalks from the leaves, and chop into 1” pieces. In a separate pile, chop the leaves.
*Feel free to use already prepared vegetable broth (homemade or bought) in place of the bouillon/water combo.  I just happen to find bouillon cubes very convenient and economical. This kind is my go-to.
*If you’re using canned chickpeas (or anything canned for that matter), I urge you to seek out brands whose linings are labeled BPA free.  I recommend Bioitalia. 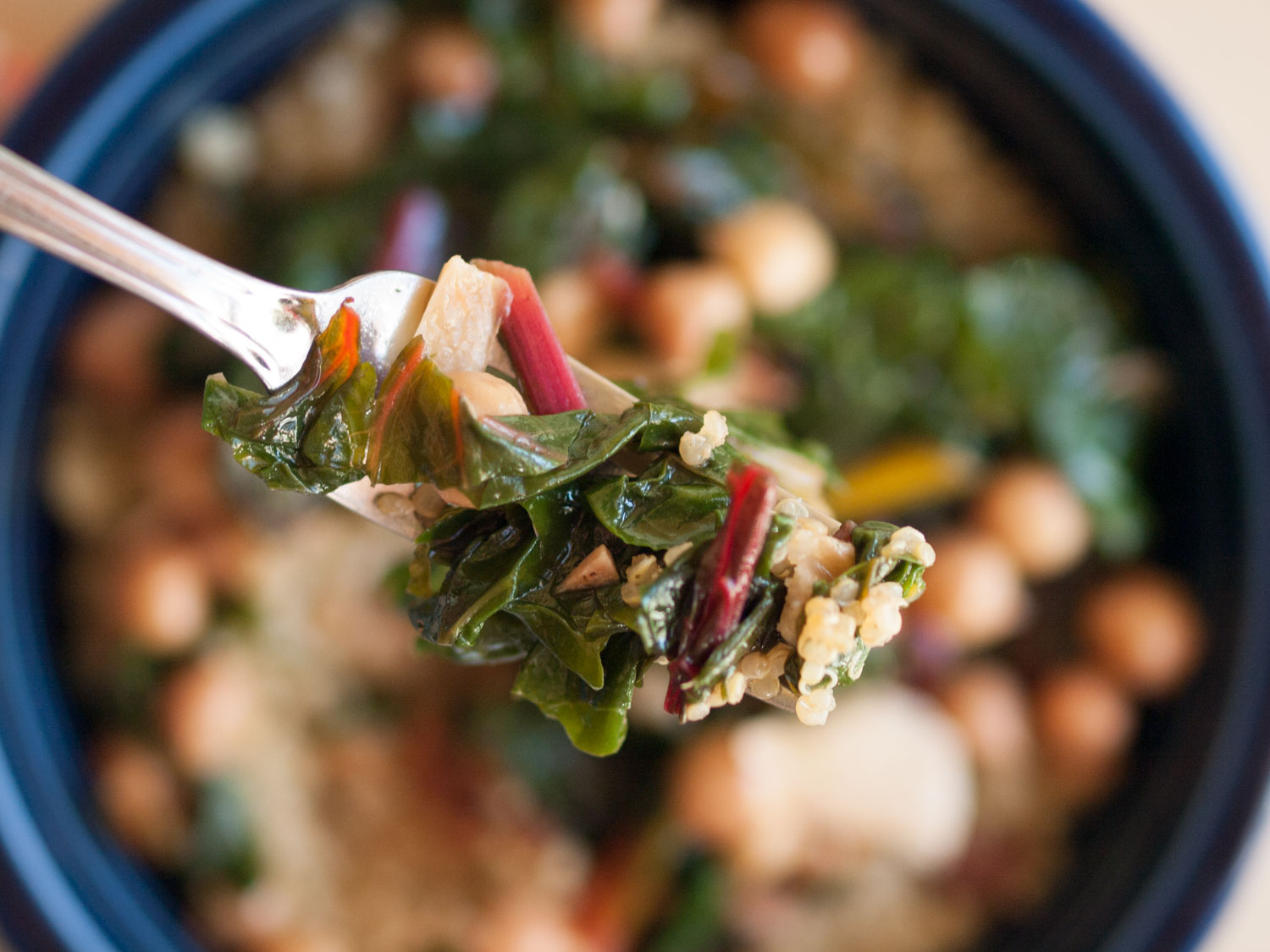 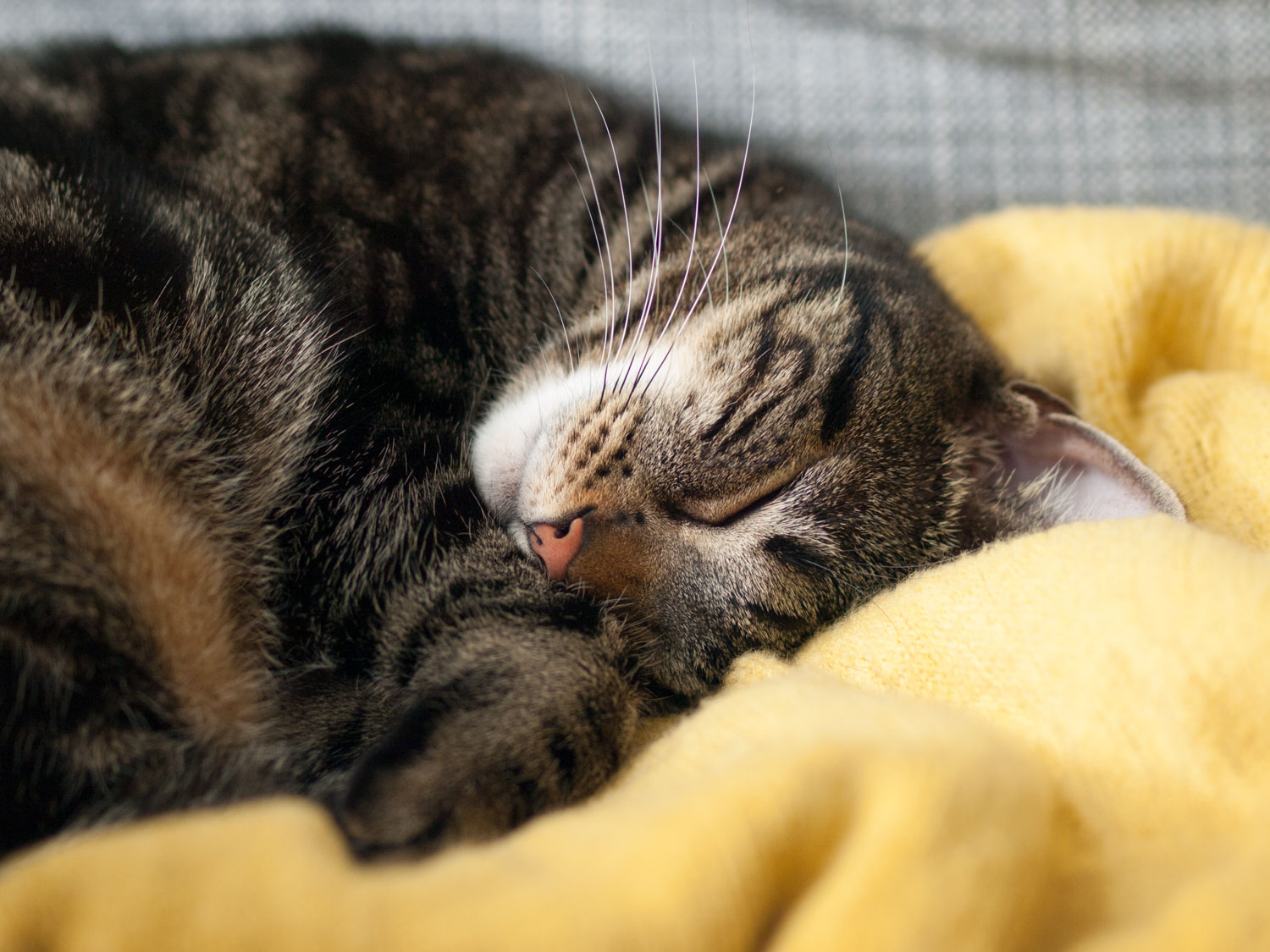 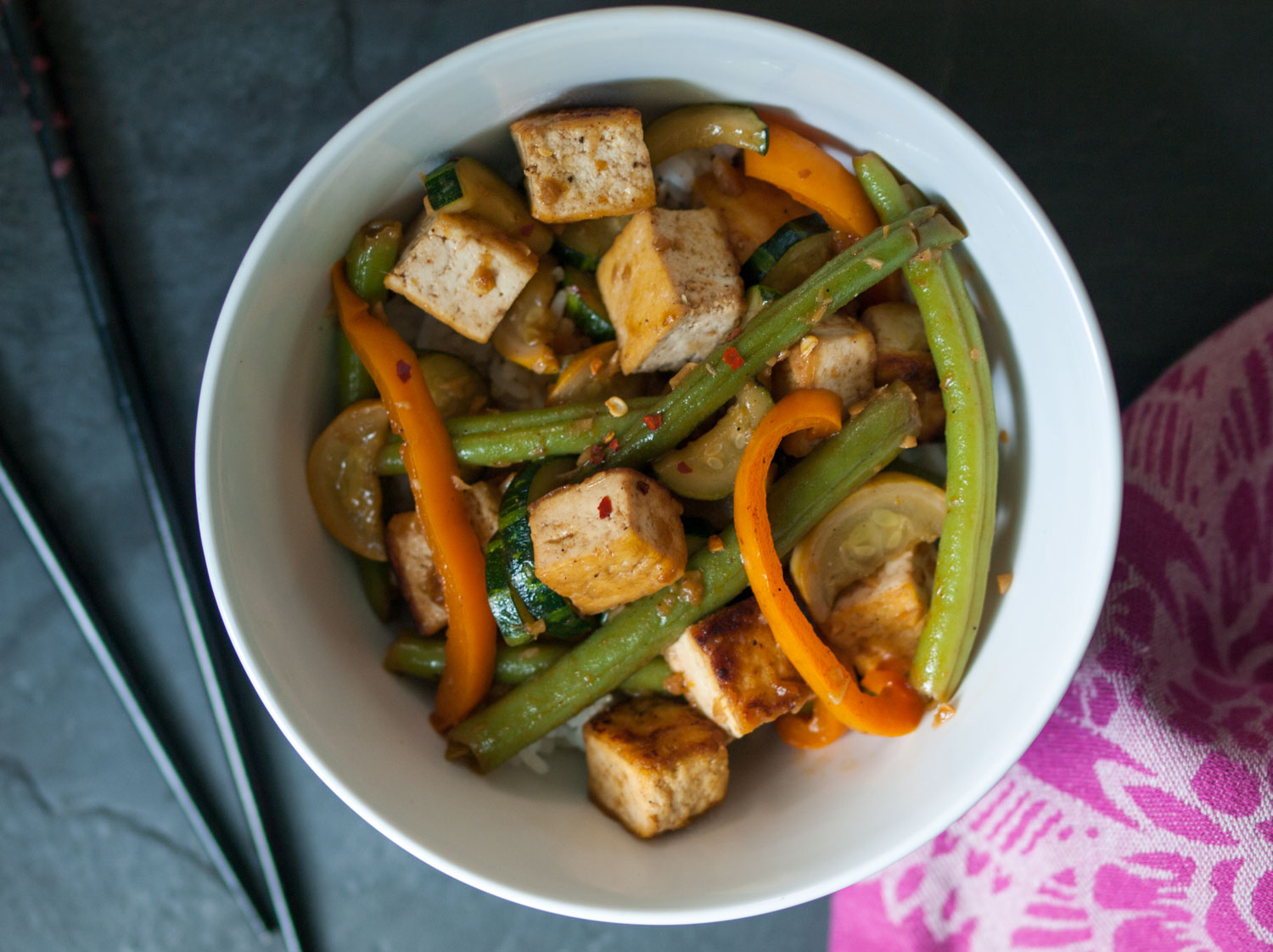 Is anyone else feeling totally stuffy-headed?  Between the shifting weather and all around bustle that autumn brings, it’s easy to feel run-down.  And yeah, sure I want cappuccinos and roasted butternut squash and stews– but I also want to eat things that are refreshing and keep me feeling energized.  I love a good stir-fry because it’s warm and nourishing yet still light.  This one is verdant and a little fruity thanks to the apricot spread, with lots of garlic and ginger to help keep immune systems strong and heads clear.